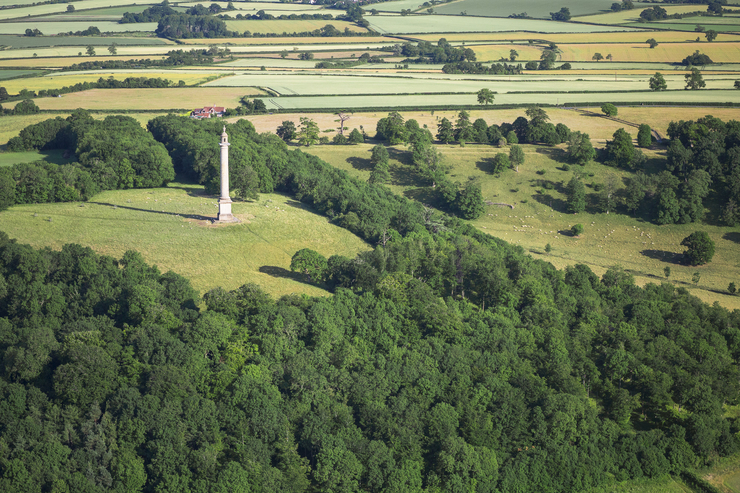 Political history and cider aren’t your usual bedfellows but in this particular scenario, they are. Its fair to say I have a strong interest in any historical cider links between UK and anywhere -but with particular regard to the links this has USA, it has become my new favourite slice of history.

On one edge of the Somerset Levels, a simple column, officially referred to as the ‘Burton Pynsent Monument’ sits neatly 700ft above the luscious summer pasture of West Sedge Moor. The views are breathtaking, its very peaceful and is the kind of spot you remember as a good place to watch the sun go down. I never considered its reason for being until I learned of its local name: ‘The Cider Monument.’ Its 140 feet tall, has 172 steps inside and aside from 250 years of graffiti around the base, there is an inscription carved into the south-eastern face that reads:

Sacred to the memory of Sir William Pynsent

(”Let this perform the empty office [of gratitude]”)

As it turns out, Baron Sir William Pynsent was MP for Taunton between 1715-1722 and Sheriff of Somerset 1741-1742, so he was pretty well connected. By 1763, when out story begins, he had made his fortune in the cider trade. At the time British Government was desperate for money due to massive debt from the ‘Seven Years War’ (of which the ‘French and Indian War’ was a small part.) Prime Minister John Stuart, Earl of Bute proposed an Excise Bill (a tax on cider) demanding four shillings to be levied on every hogshead (a typical 52 and a half gallon barrel) of cider produced which became known as the Cider Act. Then, as now, alcohol was an easy target. Beer and wine were already being taxed and given the volume of cider being produced it would certainly generate a decent sum. Pynsent, obviously, became deeply concerned and in the hope of having the Bill defeated in parliament, he sought help from the most gifted politician of his time (and future Prime Minster) William Pitt. Aside from being a military hero fresh from the war with France, he was well educated and possessed extraordinary parliamentary skill.

In desperation, Pynsent wrote to Pitt and vowed to leave his entire estate to him upon his death if he were to challenge the Cider Act. Pitt was more than up to the job - not only was he a gifted speaker, he was well respected and already critical of Butes government. To the huge population of agricultural workers for whom cider was so important (it was a serious part of a mans wages) such a tax was unacceptable and for the most part they did what they could to make it unenforceable. Some threatened to leave their fruit to rot rather than submit, others refused to pay it and some simply ignored it. Meanwhile customs officers were kicking doors in and taking what they could of value.

In a passionate speech Pitt argued against the forced entry into peoples homes to collect the unpaid taxes, and for the rights of an individual’s privacy from government intrusion saying:

The poorest man may in his cottage bid defiance to all the forces of the Crown. It may be frail; its roof may shake; the wind may blow through it; the storm may enter; the rain may enter; but the King of England cannot enter -- all his force dares not cross the threshold of the ruined tenement!

Protest turned into outrage, which lead to riots and documented public disturbances in Wales, Gloucester, Somerset and Devonshire. The response in the cider producing regions of West Country is still celebrated to this day. There are tales of surveyors, employed to determine the acreage of cider apples on behalf of the government, being kidnapped only to be released by their captors upon promise of immediate abandonment of their new positions. And in another example, an excise collector in Gloucestershire was abducted and held underground for a month!

Despite the defeat (and the fact he never actually met Pitt) Pynsent kept his word and when he died aged 85 on 8th January 1765 he left his entire fortune to him in gratitude. Grateful Pitt spent £2000 from the profits from cider sales to erect a permanent monument. But perhaps an even longer lasting legacy is his argument against the Cider Bill and the forced entry into homes by the crown, which it is believed to be the basis of the 4th Amendment to the US constitution.

Pitts reputation grew further and he was eventually recognised as a hero in America too for speaking out on behalf of the colonists against The Stamp Act of 1765. In an effort to reduce the deficit (and the Cider Act having been repealed by then) the new Prime Minster Grenville tried to force all printed materials (such as books, magazines, legal documents, newspapers and paying cards etc) in the American colonies, to only be printed onto officially provided paper, produced in London carrying an embossed revenue stamp. When news reached the colonies of Pitts eloquent and pricipled speech, the Commons House of Assembly commissioned a marble statue of him. Aside from several other statues, some ships and even children named in his honour, is it mere co-incidence that some of Americas historically strong cidermaking areas have a familiar ring to them? Pittsburg, New Hampshire - Pittsfield, Massachusetts - Pittstown, New Jersey - Pittsylvania County Virginia and Pittsburgh, Pennsylvania.

For me the monument is as much in memoriam of one of Britains greatest Prime Ministers 'Pitt The Elder', if not more so, than cider or William Pynsent.

The following drone video of the monument by Steven Law (complete with romantic music) will give you a better idea of how it sits in the surrounding countryside and why you might want to visit it.